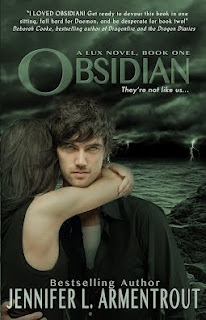 Starting over sucks.When we moved to West Virginia right before my senior year, I'd pretty much resigned myself to thick accents, dodgy internet access, and a whole lot of boring.... until I spotted my hot neighbor, with his looming height and eerie green eyes. Things were looking up.And then he opened his mouth.Daemon is infuriating. Arrogant. Stab-worthy. We do not get along. At all. But when a stranger attacks me and Daemon literally freezes time with a wave of his hand, well, something...unexpected happens. The hot alien living next door marks me.You heard me. Alien. Turns out Daemon and his sister have a galaxy of enemies wanting to steal their abilities, and Daemon's touch has me lit up like the Vegas Strip. The only way I'm getting out of this alive is by sticking close to Daemon until my alien mojo fades. If I don't kill him first, that is.


So I've been wanting to read this for a while, since it had gotten some really good reviews, and I got curious. Then I went to the store, and they didn't have it anywhere, so I was almost like, yeah whatever. But I persisted, and eventually I got my hands on it, and.. wow. Just wow. I did not see that coming!

I really liked this book, it was funny, exciting and thrilling. I read it in two days straight (well, I did have to go to school and sleep). It was just plain awesome!

I have been looking for this kind of book in like forever, you know, a book where the main character aren't just head over heels in love with each other, but with a good deal of arguing and heaty banter. I've found some books that have it, but it always only last for a short while, and then they are like crazy in love. Sigh. But not Obsidian. Nope. Katy and Daemon has this hate/love relationship (with emphasis on the first), and you never know where and how an argument is going to end. It continues through the book, and doesn't just end with a total submission from any of them.

The story was fantastic, and I liked the new element of, er, supernatural. It was new and exciting, and I have not seen anything like it before. (And if you heard that it resembles Twilight, it is not true. At all.) Anyway, it was well-developed and with some interesting twist, though perhaps not very surprising all the time.

Katy was a great character, she did not take any crap, especially not from Daemon. She has courage, she is independent, and she has a mind of her own. Yes, you heard me - she does actually do a lot other than drooling over Daemon. She stands her ground, and doesn't just take anything from him. On the contrary. I think some other books could learn a lot from this. And did I mention she is a book-blogger? Well, she is, and that just makes it even easier to relate to her. She understands the passion for books.
Daemon is the essence of the hot, but bad main character. On the out side Daemon is really an arrogant douchebag, but underneath he is actually a very sweet and deep guy. He has his reasons for being the way he is - and boy, are that good reasons.

The writing was very good, it flew effortlessly. I loved Katy's sarcastic comments, and I have to admit than some of them definitely made me laugh out loud. Which reminds me, the humor in this book was great, making me laugh much of the time. Especially the constant banter between Katy and Daemon.

I look forward to reading the next book in the series, Onyx.


☆ ☆ ☆ ☆ ☆
Posted by Book Lover Recommends at 8:24 pm
Email ThisBlogThis!Share to TwitterShare to FacebookShare to Pinterest
Labels 5 stars, YA Paranormal, YA Science fiction