Waiting on wednesday is a weekly event hosted by Breaking the Spine that spotlights upcoming releases that we're eagerly anticipating.

This week's Waiting on Wednesday is: 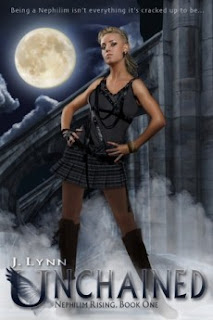 Between the pissed off creatures that want demon-hunter Lily Marks dead and the fallen angel who just … wants her, Lily is about ready to trade in forever for a comfy job in a cubicle farm.
Mortal enemies, the fact that Lily and Julian are civil to one another is enough to have her thrown out of the Sanctuary. Even she can build a laundry list of why getting close to him is career suicide, but she can’t shake her not-so angelic stalker or how he brings her dangerously close to ecstasy.
As if Lily already didn’t have enough problems, the hits just keep coming. Blindsided when a traitor is discovered working from within the Sanctuary, Lily is shocked to find he’s determined to get her kicked out. Her relationship with Julian provides the perfect fuel for suspicion, and she quickly finds herself being hunted by well, everyone. Her only hope is to discover the real traitor before she loses everything—and she’ll need Julian’s help. That is, if Julian is really there to help her … or destroy her.
Yeah, being a Nephilim isn’t everything it’s cracked up to be.
This book was actually due to be released yesterday, which I had very much been looking forward to, since I love the author and the story seems really good. Then it was pushed back to September 24, 2013, and was like; eh what? WHAT?? NOOO! I'll have to wait almost an entire YEAR?! That just kind of suck...
﻿

What is your WoW? Leave a link below.

Posted by Book Lover Recommends at 8:34 am
Email ThisBlogThis!Share to TwitterShare to FacebookShare to Pinterest